Noh and Kyogen is well known as a Japanese traditional art form which can be compre with Kabuki and Bungaku.

Actually, the history of Noh and Kyogen date back to the Nara–Heian period(710-1185) and is even longer than Kabuki, which is one of representative Japanese traditional performing arts.

Here, you are learning the basic history of Noh and Kyogen, how they were passed down to the present, dates back from the pre-Muromachi periods. (Muromachi period started since 1336.)

History of Noh and Kyogen: from pre-establishment to the modern times

Noh and Kyogen stem from “ Sarugaku” originating from “ Sangaku.”

It is believed that Sangaku came from China during the Nara period(710-784), and in the Heian period(784-1185), it had developed into Sarugaku characterized as a comical theater.

Sarugaku came to be a play for Shinto ritual with the times.

During the period of the Northern and Southern Dynasties to the Muromachi(1336-1392), Kan-ami who was a popular Sarugaku instructor at that time, completed Sarugaku with his son Zeami.

During the Muromachi to Azuchi-Momoyama period(1568-1600), the government employed Nohgaku(Noh and Kyogen)as “Shikigaku,” which made it popular to the extent which many military commanders performed Nohgaku and played the Hayashi tune of music.

Moreover, it is believed that 90 percent of the present repertory was created in this era.

Kyogen, which inherited a “comical” element of Sarugaku, developed alongside Noh.

During the Muromachi period, improvised acts based on a simple plot were commonly seen. With unscripted lines, Kyogen performers displayed a short comical play.

After promoting to Shikigaku in the Azuchi-Momoyama period, Kyogen received the patronage of the military government, which brought creation of scripts.

I will mention about them in detail below.

However, following the Meiji Restoration(the Tokugawa government in Edo was overthrown in 1868), the government’s support ceased, which caused the decline of Noh and Kyogen.

Consequently, Noh performers left from the stage, and exemplified as the extinction of “Sagi” which was one of the three school ,due to a lack of successors.

During the Taisho- Showa period(1912-1989), a turbulent age, the rest of Noh performers strived to retain the tradition.

With their dedication, Noh and Kyogen have remained as the same over centuries of performance.

Founder of Noh: Kan-ami and Zeami

Kan-ami and Zeami are credited with having perfected Noh as it exists today.

Kan-ami was a Noh performer whose stage name was “ Kanze,” and was called Kan-ami when he became a monk.

He was based in Nara but sometimes performed in Kyoto, meanwhile he accomplished the foundation of the present Noh form.

Kan-ami has been considered as the founder of Noh with his son, Zeami.

In the Muromachi period, when Kan-ami performed in Kyoto, the third shogun Yoshimitsu Ashikaga was very impressed, so that, Noh, which would be an offering at shrines, came under the patronage of the military government.

In this way, the art for the general public reached an honorable position, an official art for the Shogun family.

Zeami, a successor of Kan-ami, have drawn up the concept of Yugen (profound grace and subtlety) and completed the perfect form of Noh.

His numerous works including “Sanemori” and “Takasago” are still performed today.

Kanzmi and Zeami were creators of Shitekata Kanze School, the largest school out of the five existing Noh schools.

In terms of the school, there were different schools depend on the actors who played the main roles (shitekata), supporting roles (wakikata), musical accompaniment (hayashikata), and so on.

As Kyogen has a strong element of improvised performance, the first script appeared later than that of Noh.

Until then, performers played with improvised dialogues based on a simple plot.

In the Edo period, Noh and Kyogen were adopted as “Shikigaku,” which led “ Ohkura,” the oldest school, to get off the ground with “ Konparu” of Noh. “ Izumi” also strived in Kyoto, Owari and Kaga.

“Sagi” was the most flourished school out of the three.

After the Meiji Restoration, a decline of the government caused the diminishment of Nohgaku and its supporters, for instance, a collapse of “Sagi” and the disappearance of the masters of “Ohkura” and “ Izumi.”

However, later on, “Ohkura” and “Izumi” were restored by passionate disciples and have remained today.

Hopefully, you have enjoyed the history of Noh and Kyogen, such as why Noh and Kyogen are a set of art and how they were handed down to the present.

Noh and Kyogen represent a 400-year-old Japanese culture, Japanese life style and the way of thinking.

Broadening your insights will bring you more joyful appreciation of Noh and Kyogen! 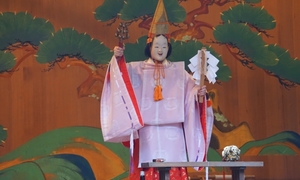