A Total Entertainment of the Triad: Tayu, Shamisen guitar player and Puppeteers

The popularity of Bunraku(文楽) that is a Japanese traditional art since the Edo period(1603-1867) is coming back on the rise again.

It is proved with the annual audience number of the National Bunraku Theater in Osaka, which has exceeded over 100,000 people throughout the last six years since 2012.

Bunraku is also known as Ningyō jōruri (人形浄瑠璃), a form of traditional Japanese puppet musical performance, and is one of Japan's three major classical performing arts along with Kabuki and Noh.

Joruri is a type of Japanese music with a story narrated by a Biwa minstrel(Biwa is four-stringed musical instrument originated from Chinese), and it began with "Heikyoku(平曲)” which is a song with a narration of “平家物語Heike* Monogatari (The tale of Heike)”

Meanwhile, the puppet play in Japan was originated by the group called “Kugutsu(傀儡)” who performed various puppet shows while travelling around the different regions in Japan during the Heian period (794 AD – 1185).

Ningyo Joruri Bunraku was established by the integration of these 2 different performing arts during the Edo period that had developed separately. Ningyo Joruri played by professionals between the end of Meiji period (1868 – 1912) and the beginning of the Taisho period (1912 –1926) is currently only played at “Bunraku-za Theatre” in Osaka.

This is why Ningyo Joruri played at “Bunraku-za” was named “Bunraku”.

Although puppet plays exist in many countries around the world, what makes
Bunraku different from them is that Bunraku is a total performing art played by the triad consisting of a Joruri narrator called “Tayu (太夫)”, a Shamisen guitar player and a group of three puppeteers.

The passionate stage performance is a product of the chemistry with full of spirit among the triad.

Among a variety of Ningyo Joruri played in many regions throughout the country, a new performance style was established in Osaka during the mid-Edo period.

Various tales that reflected the society at that time were performed one after another, and Bunraku grew as a popular theatrical art among commoners.

As you see, Bunraku is considered one of the typical classical performing arts in Japan, while it contains many local aspects of Osaka just because it had evolved and refined in the popular culture of the town of Naniwa (current Osaka).

Innovative Developments made by Gidayu and Chikamatsu

The tales narrated by Biwa Houshi began with "Heikyoku(chanting of the Heike Monogatari to biwa accompaniment)" rapidly evolved along with the introduction of Shamisen guitars imported from China via Okinawa in the middle of the 16th century.

Since then all the narrative performance including "Joruri Hime" started to be called "Joruri".

There are still various styles of Joruri plays remaining in Japan, such as the ones played in Tokonazu and Shin-uchi originated from Edo (current Tokyo,) and the Joururi typically played in Bunraku in Osaka is called "Gidayu-bushi," which was started by Gidayu Takemoto(1651-1724) in the end of the 17th century.

Gidayu travelled around the western part of Japan and acquired skills of various regional arts, and he opened Takemoto-za (theatre) in Dotonbori, Osaka and in 1684. 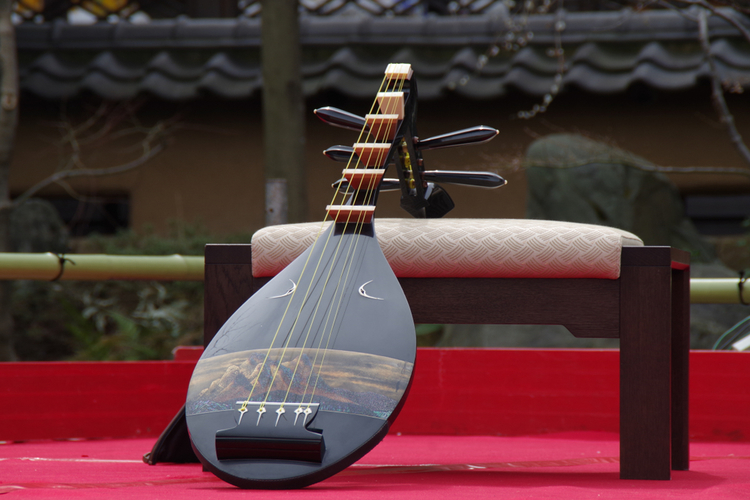 Here comes Chikamatsu Monzaemon, who joined this Takemoto-za theatre as a playwright.

Chikamatsu produced many masterpieces of plays in different genres one after another including love suicide stories such as “Sonezki Shinju” and “Shinchu Ten Amijima (translated “Double Suicide”),” and in the genre called Sewamono, dramas describing common people’s life or the society, such as “Onna Koroshi Abura Jigoku(translated “The Oil-Hell Murder”)”

The popularity of Ningyo Joruri Bunraku rose to its peak which even exceeded that of Kabuki.

In fact, many programs performed in Kabuki were originally written for Bunraku that you can see how popular it was.

The narrator of Gidayu-bushi is called "Dayu."

In principle Tayu narrates the conversations of all men and women characters in all ages in a play over 2 hours by himself while powerfully depicting a story line and scenes in various tones.

In order to become fully competent as a Tayu, it requires almost a lifetime training to be recognized as a master of Tayu around the age of 60.

Unlike the field of Kabuki which is hereditary, children of a Tayu are not necessary to take over the role of Tayu.

This is due to the strict and life-long training to achieve the master level, many Dayus are unwilling to make their children take over.

Gidayu-bushi (narrative music) is performed along with playing Shamisen guitar.

As the Shamisen guitar used in Bunraku is designed exclusively for Gidayu performance, and with the large size, it required a Tayu to be skillful to play.

This Shamisen guitar produces various ranges of sounds and tones to express delicate feelings from boldness to fineness like sobbing.

One of the Bunraku’s features is a puppet operated by 3 puppeteers.

This triad operating style was first implemented back in 1734 at Takemoto-za theatre. The head puppeteer maneuvers the expressions of the torso and right-hand face by using a device called “Omotsukai”.

The secondary puppeteer is responsible for the movements of "left hand side" of the puppet and the third puppeteer takes charge of "footwork".

It takes long time to fully master the techniques as a puppeteer, and it is said as long as "10 years for footwork operations, 10 years for left-side operations.

Revival through Ups and Downs

In the middle of Edo period, Bunraku had a momentum as the trendiest entertainment surpassing the popularity of Kabuki.

However, it did not last long and the journey of Bunraku has not been a smooth sailing all the time.

Among various events, the biggest challenge happened to Bunraku was the movements of separation between two parties after the war time.

The company “Shochiku” began to operate Bunraku since the end of Meiji period just like the current Kabuki, but after the war time, the performers split into Shochiku and anti-Shochiku.

A series of these chaotic situations led the popularity to decline.

Finally, Shochiku withdrew from the management in 1963, the management of Bunraku was transferred to the Bunraku Association including local governments such as Osaka prefecture and Osaka city.

The conflict of separation was finally settled by the arrangement that directs all the actors would belong to the association as performing artists.

While Bunraku has gone through several ups and downs over its long history, it was certified as an intangible world heritage by UNESCO in 2003 and began to be performed overseas.

Bunraku has become known as one of the Japan’s representative classical performance arts.

With the popularity and high demand, ticket for the performances at the National Bunraku Theater (Osaka) and the National Theater (Tokyo) are hard to get.

Despite the rising popularity, what Buranku is facing is finding successors.

Now all the human national treasures in Bunraku are gone.

With a series of losses of many experienced performers, talent development of next generation is urgently required.

Sumidayu Takemoto, a human national treasure who passed away in 2018, describes in his autobiography:

“Each Bunraku performance is just like a ‘serious match’ among the triad consists of a Tayu, a Shamisen guitar performer and 3 puppeteers.

Each party of the triad freely performs their own tasks on the stage without hesitation, but somehow every piece of triad movements fit together.

Why not going to the theatre to watch a live Bunraku performance filled with passions and professional sprits?